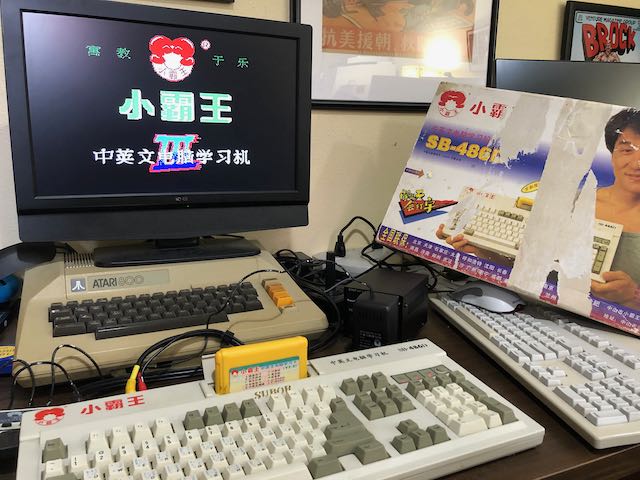 The Subor 486D is a really interesting system. During the 80s and 90s, China’s economy was growing and people starting having more disposable income. How ever video games were techincally illegal. Subor had a great idea, make a Famicon clone system, and release it with educational software. The result is the SB-486D. There are many versions of this system, mine happens to be the SB-486D. In order to get past government regulations, they shipped the system with a copy of BASIC, typing lesson software,  sing-a-longs, and english language applications. Jackie Chan was hired to endorse the computer too!

Taking apart the system revels an interesting layout, it’s mostly just keyboard, with an NES on a Chip under a blob on the central keyboard. I thought I would find a complete 6502 computer, though I suppose that would have been harder to make a clone with than the NES on a chip that the chinese electronics industry had been churning out at them time.

I got to play the game cart that came with it when I was in China this summer (27 versions of Super Contra!). I need to get a 220v converter to use it here in the US, so thats on the list of items i need to get, since I got a few carts from Ali Express That supposedly contain every NES/Famicon game ever made! (And I’m sure it’s legal). There is no corrosion on the boards, but i think I will replace the caps soon.


I will leave you with the ad Jackie made for this machine.