Building a throw back / retro PC can be complicated. First you need to pick the era you want to target. Then you will want to scope out the hardware to run those titles. For example: if you wanted to be able to play the old Sierra and Lucas Arts adventure games, a system running a 486 SX/DX with a Sound Blaster 16 would work pretty well. It's old enough to run the vast majority of the EGA/VGA library, and you can run some of the Windows 95 era games as well. Or if you are targeting 90s FPS games, a Pentium 200 / MMX 233 (If you can get a Pentium Pro, DO IT), paired with a 3dfx card and a Sound Blaster AWE 32. You are going to want a CF card to IDE or a SD to IDE adapter so you can easily add files to the system. The old hard drives are probably going to be worn out.

If you are building your own PC: MAKE SURE YOU CAN FIND THE MOTHERBOARDS MANUAL. Older systems use jumpers to configure the CPU. Prebuilt systems by companies like Compaq are a good bet, getting them to work should be straight forward. Upgrades are easier to find for the 386/486 era then the PII. If you are building a 5x86, 6x86, K6, or MII system, do some research on what games/apps work well with them. The AMD 5x86 is actually a renamed 486 DX4; and the Cyrix 5x86 is a Pentium clone, neither will run Quake era titles all that well.

My system: A friend had an old Gateway 2000 system he had purchased back in 2000.
The 3dfx card I was able to get my hands on, a Diamond Monster 3d Voodoo 1 card, will not work with AMD Athlon systems of the era. I was looking for a Voodoo 3, but was able to find a STB Velocity 100. ?It only has 8mb of video ram, instead of the Voodoo's 16mb, but with a registry edit, you can enable both texture units and get voodoo 3 level performance, with Glide support.
I was able to find a Roland SC-7 off ebay for $65, which is crazy. Currently the cheapest Roland/Yamaha MIDI device I can find is more than $100. Don't bother looking for a MT-32 if you're not willing to spend a lot of money.

Once you have it running, download Afterdark so you can have a proper screen saver. I currently have it swapping between Star Trek modules. 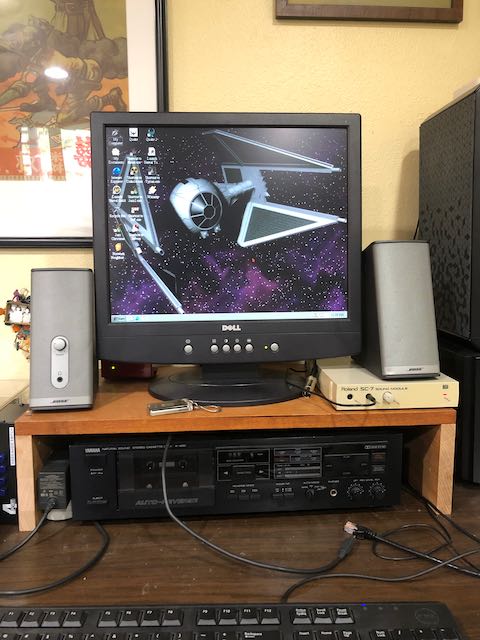 Gateway Select Specs When I got it:

STB Velocity 100: Great review of the card from Anandtech here. Basically it's a Voodoo 3 with 8 MB of video ram and one TMU disabled. The second TMU can be re-enabled by adding a line to your windows registry. Once enabled, the card runs about as fast as a Voodoo 3. A great way to add glide support to a retro machine, for (when I bought it) less than $50.

Aureal Vortex: OEM part from a Dell system I believe. The driver software for these Aureal cards are fantastic. Creative’s drivers are always annoying, and with the SB Live cards you have to really hunt for the right ones to work with your specific card. The SB Live card that my system came with had a broken 3.5mm audio port from some bad caps. Soundblaster emulation on the Aureal card is really good in MS-DOS mode.

CF Card IDE adapter: one of the cheap ones you get from Amazon/Newegg/Aliexpress.

500 Mhz Athlon CPU – I ran Descent last night and it ran like it was in fast forward. I think the current CPU is much too fast for many of the games I was planning on running.

A New Case – either a more modern case or a beige case. If I get a modern case, I would also get the USB card in order to use the front panel USB ports.

I found a Firewire PCI card at Goodwill 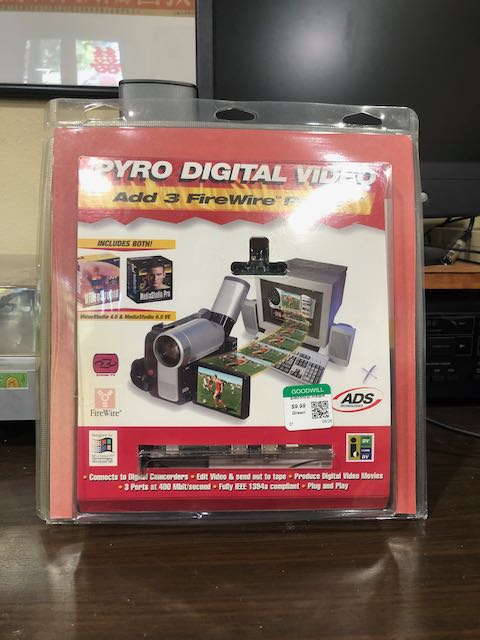 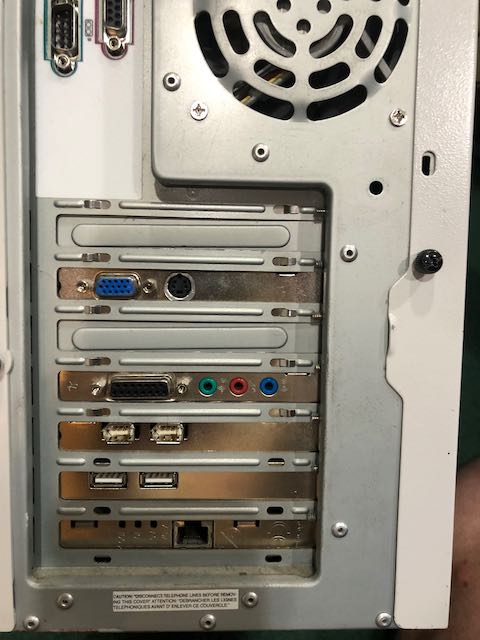 My buddy Chris had an old Dell system in his garage that had survived a few moves (including one from Texas) and wanted to know if I wanted it. It’s a Athlon 1Ghz based system, with a GeForce 2, sound blaster live, and a 10/100 nic. A few cd-two drives were included, but no HD. So I added this. Windows loads really fast now. I’m looking forward to getting this running properly. The packed in OS disc comes with Windows ME (ewww). I want to put it in a more modern ATX case, add a few more quiet fans and replace the PSU. Changed OS to Windows 98.

Adding Peace and Quiet to the PC

The continuing adventures of the Retro Machine. Old Athlon machines (hell any machine from the late 90s) have this lovely high pitched whine associated with them. Usually this came from 2 places: the CPU cooler and the Power supply.

First replaced the CPU fan on the heat sink. I couldn’t find a Noctua fan the right size. So I hot glued a 60mm fan over the heat sink. I also replaced the Power Supply 80mm fan with a Noctua fan. I made sure it was discharged and then very carefully replaced the fan in the Power supply. I added 2 wires to adapt the Noctua fan to the 2 pin connector in the PSU.

I also added a new fan to the exhaust since that was in the original set up too. Over all the system is much quieter when running. The high pitched whine is gone. The main downside is that it doesn’t sound like a high performance machine form the era. The latest update to my retro PC build is a USB 2.0 PCI card. This particular card comes with a pin-out for internal accessories and a internal USB 2.0 port along with the 2 external ports on the back. I got it so I could move files to this machine faster than I could before. Quake 2 with the motherboards USB 1.0 ports took around 30 minutes to copy, with this card, it takes about 5-8 minutes.

But the really fun part was this is a old part still in it’s box and shrink wrap. It looked ready for the display shelf at Fry’s. I ran a USB extention cable from the internal USB port to the front of the case. No more fussing around the back of the machine trying to connect a USB drive. USB and parallel port cards can still be found as “new old stock” on ebay, but I still get a kick out of it. LGR has a great video on a ”new old stock” Intel Overdirve CPU. I get a kick finding old kit that has never been used.