Like a small blog. Short rants of around 240 characters.... Updated: 17/07/2022
Thoughts on Escape from Tarkov: I got further into Tarkov this wipe then ever before. The game starts to get to me after a while. I am finally too old to play some multiplayer games. It's an interesting concept, and is more or less well executed. But like PVP in MMO games, it ultimately comes down to who has more time to play it. This isn't a "skill ceiling" (like a Soul's game), but to "get gudd" it requires constant repetition. So like a MMO PvP game, it comes down to working out the meta, and combining it with running the same maps repeatedly. It's deep, and well crafted, but after a point, becomes excessively punishing to new and casual players. It does what it does very well. It's not a "bad" game, but it definitely made for a very, very specific audience. I am not in that group. But I do appreciate what it does.

If you are in the group that really likes Tarkov, good. I'm glad you like it, and I am glad it exists. The games industry would be so boring if developers didn't take risks like this. I look forward to seeing what other styles this game inspires in the future. When I hear/read people complaining that their partner made a large purchase without taking it though with them, I am usually a bit stunned. A serious relationship requires a lot of trust and communication. Anything about money requires a bit of back and forth between partners. Please communicate with them.
Dont be my uncle. New Record Day is always fun. Modern release of the Japanese edition of the Return of the Jedi soundtrack. 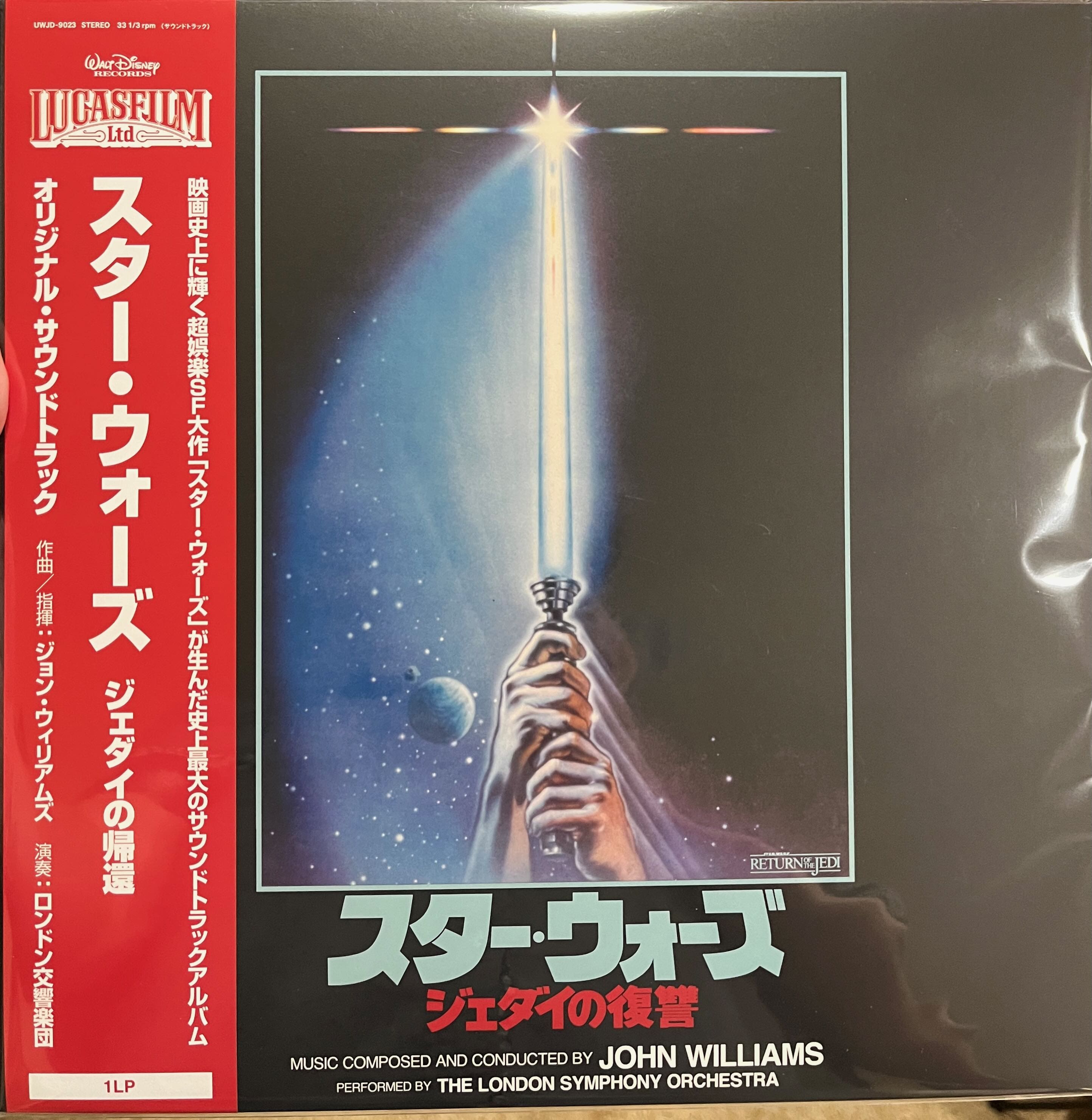 New Project starting today. I need to fix my Yamaha K-420 cassette player. It needs new belts and probably a few new capacitors. 1980's Yamaha kit, like most Japanese tech from that time period, is very rugged. If it wasn't abused, it will run. Belts, since they are rubber, usually wear out, and this player is almost as old as I am.

I still get a kick out of phsyical media of the 80s. These old players have a distincitve look that I feel is lacking with modern equipment.
If you go to a family planning clinic, turn off your cell phone. All of the tech developed in the past 20 years is being used to watch your every move. Start planning defensively.
It must be so exhuasting to be a woman. I screw up people's pronouns sometimes. I feel like crap when I do it. To be clear, this is my problem, not yours. You are fine. I need work on it. So I am sorry when I get it wrong. Using Manjro daily on my desktop has been fun. I still game in windows, but Manjaro looks to have solved all the weird little issues that I always ran into using Ubuntu. (sound not working, nvidia drivers crashing, what ever they are doing with their desktop) Hopefully devices like the Steam Deck will move more devs to support linux, and I can avoid using Windows 11. I read Marie Kando's "The Life Changing Magic of Tyding Up" where she goes in depth and explains her "Kon Mari" system. I enjoyed the book. I don't buy in to the whole minimalize style, but I like how it gets you to think about what you own, and why you have it. I don't do the "spark joy" thing she does, but instead ask myself "have I used this in 2 years?". If the Answer is No, then I need to get rid of it. That drawer of cables, gone. That interesting stack of fun paper you got back in 2017, gone. Like Kregier says "Who cares, they're in the garbage".
I bought way too much stuff in the past 10 years. I spent COVID time getting rid of it. I still have more to get rid of. My un-finished projects, which remain un-finished after all these years, are gone. That weird useless collection of "interesting things" that I look at only when new things get added to the collection, also gone (well Sold).
I'm not minimalist, but I am tired of keeping all this crap around the house that I do not need.
So yes, I recomend her book, but only becuase it gets you thinking "do I really need all of this shit?" I've completely given up on Google Search. SEGA knows people can just download the roms for Sonic 1-3, Sonic and Knuckles, and Sonic CD right? No one really needs to play a remaster (with DLC! wtf.) of 25ish year old game series. Go play Sonic Mania instead. Russin Drones being used in Ukraine are much simpler than many people thought. Honestly, I thought this was the point of drones? Make a cheap, almost commodity piece of military kit that is tasked to do 1 or 2 jobs. Easiliy repairable and replaceable. Looks like the Russians are doing just that. This does look like a quick hack though. I'm not sure how reliable these drones will be after a few months worth of constant flying. Those consumer cameras are meant to be used on the ground, in normal temps, not exposed to the elements (the used duct tape to seal the frame). It looks like it should do the job it's meant to do.

I feel I should mention, fuck Putin and his cronies.
Made the switch from Win 10 to Manjaro for desktop work. Liking it so far.

Yes playing with the Steam Deck is what lead me to try it out. Yes Asahi Linux on my macbook too.

Yes I am done with Ubuntu.
aaahhh, so that's Facebooks plan Meta will take 48% of virtual good sales. I was wondering why they were pushing their "meta verse" idea so hard. They want it to be just as dystopian as the metaverse in cyberpunk novels.
The modern internet is so f%#king exhusting. Why is everything a god damn hustle? I'm not against people getting paid, but these platforms don't do anything, and then skim money off the top. I work in IT/Software development. I wish people would stop pitching me their "million dollar" idea. Star Wars/Marvel/DC/Harry Potter/ETC. Why do people get tattoos of these brands? I do like them, but why cover yourself with a company's product for free? Shouldn't they pay to be permanently inked on to your body? When I was younger, I had a few t-shirts with things like the Superman S, or the Bat symbol. But looking back, I realize that I paid for the privliedge to advertise these products to other people. I'm not against capitalism, or intellectual property, but why use these IPs as a stand-in for a identity?
"Here is a thing I like. You can have it too from a duely authorized product distributor"
Windows Debloater script. https://github.com/Sycnex/Windows10Debloater. It's bullshit users have to develop their own tools to make their OS more useful.
It's weird. I've been using Windows since v3.0. I've had numerous Win systems. I work in a Windows focused software company. But more and more when doing work on a windows machine, the damn OS feels like it's getting in the way of what I want to do. Random UAC popups, odd inconsistent problems with network drives, and the window manager layout. I actually prefer working in MacOS or Arch. Windows is starting to feel a bit... long in tooth? Like it's just been around too long? Windows Server doesn't have this feeling. MS added too much cruft to their consumer OS.

Honestly, Windows 11 is a tragedy. I rolled the system back to 10. 10 is fine, I keep it mostly for gaming. MS, please stop adding "services", live or other wise, to the OS.
Neocities stats. I think this is wrong?

I don't think a thousand people visit this page every month.
One of the things they don't tell you about when you are young is that as you get older, you have to keep fiddling with your office layout to avoid hurting different parts of your body. I just spent the afternoon moving everything around to make my desk more ergonimic for my shoulder. Don't get old kids.
Well you can get a bit old. I was the envy of every "youth" who came into the coffee shop this morning. I fielded a bunch of questions about the steam deck. If an open srouce project change's its function, or adds lines/ opinions about an ongoing event, I don't have a problem with it. The creator/maintaner of the project can do what they want, it's their project. You can fork the old version and continue on using that. It's weird seeing open source supporters getting upset becuase a .js library maintained by one pseron, changed. If your project/company is dependent on it, then you need to make your own version that can't be changed by anyone but you.
Steam Deck arrived. Plays games very well. Most of my "Boomer Shooters" work flawlessly. Amid Evil, Ion Fury, Quake, Dusk, etc. AMD FSR tech really helps with batterylife and frame rate. Over all very pleased. Full impressions later.

My Steam Deck is finally shipping. But it's been stuck in Eastern Washington for days now...
Put MacOS on the iPad already. They have the same damn hardware!
I look at all these Chromium based web browsers and think, "I thought we solved this problem when we killed off Internet Explorer".
"Hohokam, why dosen't your site look better/more professional?"
I've seen this article posted around the internet. Moscow University students created their own dorm computer network. Great read.
The Pixel 3, which is still a good phone, is no longer being supported by Google. This is why I switched to iPhone. Not because Applie is amazing, but becuase it supports it's phones for years after release. We can't keep wasting resources, swapping phones every 2-3 years. Google is forcing me to dump a prefectly good phone. - Vice
I salute you good sir. This is how you fuck with giant tech companies. Ruining your own code to mess with them

This Article lists many of the issues I have with the "Green Economy". We can't keep growing, and adding more and more things/production in the world. We need to start getting by with less stuff and smaller homes. There is no such thing as a eco firndly tech. It all has a cost.Tech Won't Save us. Shrinking Consumption Will. The tech industry only wants growth, they will not help anyone.
One of the better reviews of the new Matrix film. The Movie opens with people areguing with the creator of the Matrix about the meaning behind the title. PC Gamer Review of the Matrix
I kind of want to delete my twitter. I mostly follow people in the computer security field, but I still find myself spending too much time browsing the site.